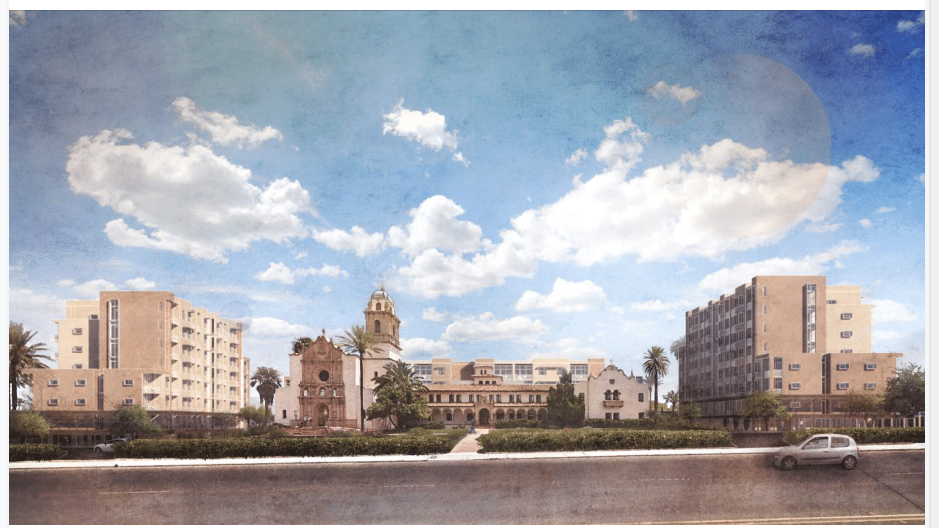 Tucson City Councilmember Steve Kozachik is taking a new tack in the battle over the future of the midtown Benedictine Monastery.

“The building remains one of the last expressions of this architectural style in the Tucson area,” Kozachik wrote in his proposal for the Council. “It has been a cultural, architectural and spiritual landmark in Tucson since 1940.”

Local architect Roy Place developed the monastery for the Benedictine Sisters of Perpetual Adoration 80 years ago, in his signature Spanish Revival style. The sisters sold the monastery to local developer Ross Rulney in September 2016 for $5.9 million.

Before the sisters sold the monastery, they put it on the National Registry of Historic Places, thinking that would protect it from demolition. The certification is framed, hanging on the wall of the monastery. But the national registry doesn’t protect the historic structure—it’s purely honorific.

The current zoning in that area is for offices and high-density residential—aka student housing. There’s also a maximum 222 living units and a 40-foot height, or about four stories. There’s no restrictions against tearing down historic structures and no requirement for neighborhood participation or design review.

Together, the architects and developer proposed the Historic Landmark designation, but in exchange, the city would have to allow Rulney to build higher than 40 feet around the monastery and expand the number of allowed apartments or condos. As part of the deal, Rulney would agree to prohibit renting by the bedroom—the typical student-rental arrangement—and to hold several reviews for public input.

The developer also requested flexibility with use of the monastery, to possibly turn it into a boutique hotel, restaurant or community spa.

Kozachik said he’s not on board with “building seven-story apartments on each side of the building, eliminating all of the landscaping and reflective spaces, and calling that acceptable scale for the area. Even if this wasn't adjacent to residential, what they're proposing dwarfs the monastery.”

He says when he told Rulney the height wouldn’t work, the developer threatened to demolish the monastery and sell the property to a student housing company—thus spurring the councilmember’s push to attain the Historic Landmark designation.

But there may be a complication to stopping Rulney from demolishing the historic structure: The Private Property Rights Protection Act, also called Prop 207. The law, approved by Arizona voters in 2006, prohibits jurisdictions statewide from changing zoning or creating restrictions that reduce a property’s value without compensating the property owner for the lost value.

If Rulney can’t sell to a student housing development, the city could hypothetically owe him millions. But Kozachik argues that the Historic Landmark designation raises the value of the property.

“I’m gonna get people to the table who say it increases the value,” Kozachik said. “Or, we can sit down at the table and talk.”

Kozachik said this is just the beginning of a long Historic Landmark process, but while the process is taking place, demolition is no longer an option.

An earlier version of this story ran in the May 24 Tucson Weekly, which has a print deadline of May 22.