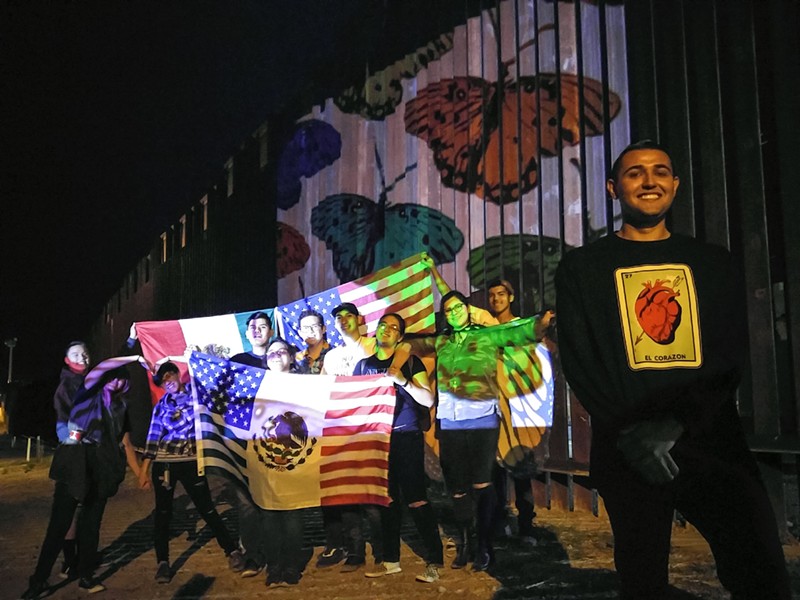 Both sides of the U.S.-Mexico border bustled with activity on a recent Saturday night in Nogales. On the U.S. side of the border wall, youth display their perspectives of the border. In Mexico, people go about their daily lives, yet stop to curiously glance at the teens projecting images on the border wall.

“No matter what you create, the border is your canvas,” Ernesto Somoza, a graphic design teacher at Pueblo Magnet High School, told his students.

With the help of a $600 Community Share Grant, Somoza organized the exhibit so the youth could create art that reflects their impression of the border. He hopes the new experience will motivate them to continue sharing their views.

Somoza said the exhibit reminded the students they have a voice and can influence things that affect them. The border is their backyard, and they can soon make a change by choosing who represents them in the political sphere.

Being able to see their art come alive on the border inspired the students and made their messages more powerful, he said.

Among those present at the exhibit were also high school students who didn’t submit art, family members, activists from Derechos Humanos and local artist Ruben Moreno, who judged the pieces and chose a winner by Tucson High junior Tony Moreno.

Student Kyle Elhard feels inspired by the spirit of this exhibit and the current youth movement, catalyzed by Marjory Stoneman Douglas survivors and the March for Our Lives.

Elhard hears phrases like “America relies on the youth” but that their generation is also told they’re too young and distracted by technology. But thinks they can stand up for things in a way the older generations can’t or don’t.

Pueblo High student Jorge Becerril, who was also an organizer for a March for our Lives event at his school, recited a poem at the Borderlands Exhibition. He described the region as being “full of tension like the country right now.”

For him, this feeling is fueled by movements like March for our Lives and Borderlands.
He hopes that this activist spirit in the youth isn’t temporary—as fleeting at President Trump’s tweets.

“I hope that that’s not what happens with these types of movements,” he said. “That they don’t end after the president says we come from a shithole country or something. For it to move past election years, for it to move past decades even. I want to see this in the history books for the years to come.”