Eve of a Strike: Teachers and Districts Prep To Walk out of Schools This Week 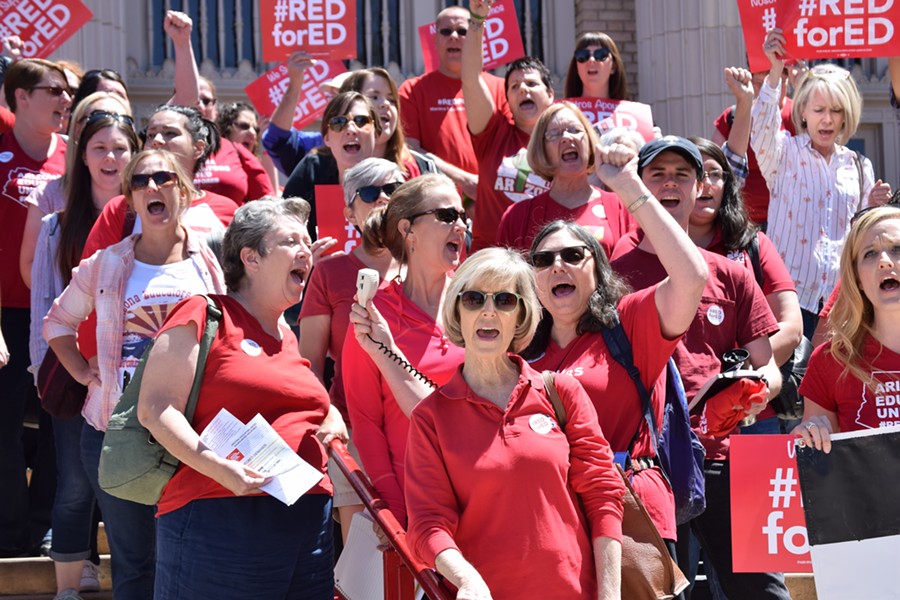 With teacher walkouts starting on Thursday, educators statewide are wearing red, waving Red for Ed signs and smiling at honking cars in front of their schools every morning, across Tucson and much of the state, demanding better public education funding.

Statewide, 57,000 votes were counted from public school teachers and staff, and 78 percent voted to walk out, according to Arizona Educators United and Arizona Education Association.

Marea Jenness, a Tucson High Magnet School teacher and leader in the Red for Ed movement, is excited about the vote. She’s been living paycheck to paycheck for years while waiting for a movement like Red for Ed.

“This is just the opportunity of a lifetime, to fight for our schools and public education in Arizona,” she said.

Red for Ed, led by the grassroot group Arizona Educators United, or AEU, has been pressuring Gov. Doug Ducey and the state legislature for weeks to give teachers 20 percent raises, among other things.

“A decade of severe budget cuts have left our classrooms in disrepair, our teachers demoralized and our students shortchanged,” said AZ Schools Now, a nonprofit advocating for better investment in public schools. “Governor Ducey has within his power the ability to end this walkout by collaborating with Red for Ed and the leaders of both parties to find sustainable, permanent and equitable solutions for our schools. Anything less is unacceptable.”

As of Tuesday morning, Ducey hadn’t yet met with either AEU or the teacher’s union Arizona Education Association, although both groups requested to negotiation with the governor.
Arizona educators are currently among the lowest paid in the country. And in response to mounting pressure, Ducey agreed last week to provide 20 percent raises for teachers as well as some additional education funding, but that did not meet all the Red for Ed demands.

“No one wants to see teachers strike,” Ducey said. “If schools shut down, our kids are the ones who will lose out. We have worked side by side with the education community to give teachers a 20 percent raise by 2020. I am committed to giving teaches this raise, and I am working to get this passed at the legislature.”

In a Monday radio interview, Ducey said he doesn’t understand why teachers are walking out when he’s giving them what they want.

But teachers in the movement say that Ducey’s offer falls well short of their demands.

“We’ve been pretty uniform in our message,” said Jason Freed, president of the Tucson Education Association. “Everybody is pretty in agreement that the current plan he has is not a workable one.”
Freed said the educators never wanted a walkout. They want to “get what’s right for kids, educators and schools.”

Teachers in the movement are skeptical that Ducey will find the money for his promised raises if he wins reelection later this year. Apart from their own paychecks, educators are also demanding wage increases for all education support staff, scheduled annual teacher raises, education funding restored to 2008 levels, and no new tax cuts until per-pupil spending reaches the national average.


“When [the walkout] ends is up to the governor,” Freed said. “We continue to highlight there was $1.1 billion more in education funding in 2008 than there is today…. That’s $10 billion that should have gone into education funding that didn’t.”

Red for Ed will converge on the state capitol on Thursday, for what promises to be a huge rally that may continue into Friday. Many local school districts let families know they would be closing schools on Thursday and would be giving updates day by day on further closures.

One complication of strikes is that any day of school closure will have to be made up in order for students to complete 180 days of instruction, as mandated by state law. Although some schools have a buffer as to how many days students can miss, the school calendar year may have to be extended and summer break postponed.

Most officials in local school districts said graduation ceremonies will continue as planned, even if students have to come back and complete days of instruction to officially graduate.

Tucson Unified School District is closing on all of its schools on Thursday, after almost 2,200 educational staff, about 69 percent, said they’re taking the day off. As of Tuesday at noon, almost 1,300 teachers had called in for Friday off.

Superintendent Gabriel Trujillo said he thinks it’s more likely than not that the walkout will continue longer than Thursday. If it goes into day three or four, Pima County’s largest school district may have to extend the school year to make up for lost days of instruction.

Trujillo said the response he’s gotten from families has been mixed. Though most are in support of the teachers, some are struggling to figure out how they will deal with caring for their children during a long-term walkout. But he said in his 21-year career, he’s never seen as much community support for education as he sees now.

TUSD will be providing students who need it with breakfast and lunch at their neighborhood schools on Thursday, although there will be no transportation due to the number of bus drivers participating in the walkout. Also, the schools will stay open for any employees who want to work, even if there are no students.

Marana Unified School District said the majority of classroom educators and staff plan to participate in the walkout on Thursday, and all MUSD schools will close. The district will also be providing breakfast and lunch services at select locations because, like many districts, a number of MUSD students rely on these meals.

Sunnyside Unified School District is closing on Thursday and Friday, but all school cafeterias will be open for breakfast and lunch. Students can eat at any site regardless of what school they attend, but their parents must stay with them.

Catalina Foothills School District schools will close beginning on Thursday until the walkout ends. CFSD anticipates having to add instructional days to the end of the planned school year.

All Amphitheater Public Schools will close on Thursday and Friday, though kitchens at every school will be open in the morning for Grab & Go breakfast and lunch meals for students. The district is optimistic schools will reopen on Monday, April 30, though the walkouts may continue.

Sixty-four percent of Amphi educators voted to walkout. And Superintendent Todd Jaeger says he understands why teachers are fed up, seeing as the state says they have no funding for education then adds to voucher programs and tax cuts.

“I can’t support walking out and leaving students without services,” he said. “I do totally understand the kind of rationale that brought us to this point.”