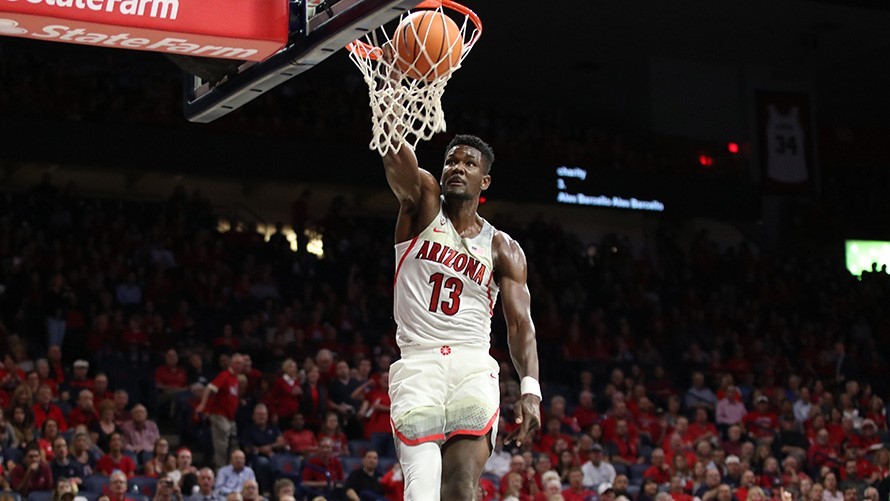 It’s a brave new world for members of the Arizona basketball team, who take the stage at McKale Center for the first time since the latest FBI-related saga hit the program.

That saga, involving an alleged discussion between Coach Sean Miller and disgraced sports agent Christian Dawkins about a $100,000 payment to land Deandre Ayton, is far from resolved.

It’s also far from verified, with ESPN issuing a series of corrections to the report, including the alleged date and year the conversation occurred.

This column isn’t about those allegations, however, for we’re here today to talk about the actual sport of basketball, not the soap opera around it.

What we do know is that Ayton, who is virtual lock to be a lottery pick in next year’s NBA Draft, is averaging a team-best 19.9 points per game and 11.2 rebounds this season.

We also know that the matchup of Ayton and do-it-all Cardinal forward Reid Travis will be must-see TV, based solely on how the two played in their previous matchup this season.

In that showdown, which the Wildcats won, 73-71, Travis outplayed the Bahaman big man, scoring 20 points on 8-of-14 shooting, while pulling down 10 rebounds, to Ayton’s eight.

Ayton, meanwhile, had one of his worst showings in his short collegiate tenure, scoring nine points, while shooting 40 percent (4/10) from the field.

Fast-forward 40 days and a myriad of changes have occurred, from Allonzo Trier’s indefinite suspension for a failed drug test to Miller’s sudden persona non-grata status.

What we do know is that the Cardinal (16-13, 10-6) will push Arizona to its limits, given their previous matchup, which saw the Wildcats’ jump out to an 11-point lead, before holding on for dear life at the end.

That victory, capped off by a go-ahead layup by sophomore guard Rawle Alkins with 38 seconds remaining, put a temporary pep in the Wildcats’ step, moving them to 6-1 in conference play.

They’ve gone 6-2 since, a feat all the more spectacular when considering the whirlwind of controversy that the program’s overcome this season.

The Wildcats (22-7, 12-4) can ensure at least a share of the Pac-12 regular season championship with a victory tonight and can clinch it outright with wins against Stanford and Cal on Saturday.

They currently lead Southern California by a half-game, with the tie-breaking advantage of beating the Trojans in their lone matchup this season.

A key tonight will be whether the Wildcats can start off hot and stay out of foul trouble, given the bipolar play that they’ve shown all season.

There’s still no word on whether Miller will be on the sideline tonight, or what the future holds for the program, two weeks ahead of the first round of the NCAA Tournament.

Arizona looked great for 20-plus minutes in Eugene last Saturday and shot an eye-popping 57.6 percent from the field against the Ducks.

The issue, however, was the team’s inability to hold onto the ball, committing 17 turnovers, to Oregon’s four.

Arizona will need better ball handling as a whole to win against the Cardinal, with extra impetus placed on guard Dylan Smith, who turned the ball over six times against the Ducks.

Smith, who’s been thrust into the lineup in place of Trier, has a mediocre 1.2-1.1 assist-to-turnover ratio this season, and has shot a miserable 37.9 percent from the floor in his first season in Tucson.

The team’s success starts and ends in the hands of the University of North Carolina-Asheville transfer. We’ll see how he handles himself in primetime tonight.

How to Watch: Arizona plays Stanford at 8 p.m. tonight, with Fox Sports 1 carrying the game.

How to Bet: Arizona is an 11.5-point favorite to win tonight’s game.