The Tip Off: Rawle Alkins leads Arizona into Tempe to play Tra Holder and Arizona State 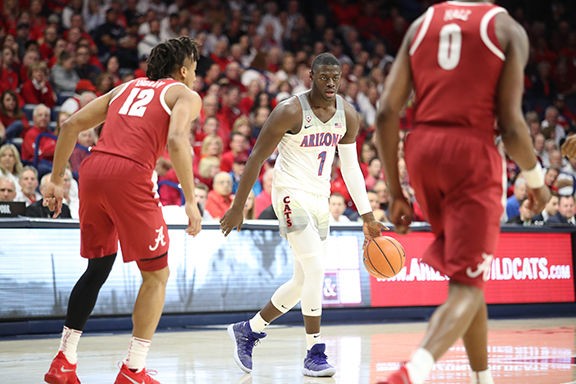 Welcome to the week where full of good, old-fashioned hate sweeps across our state like a wayward Haboob racing across the parched desert.

I'm talking, of course, about the biannual throw-down on the hard wood between our state's largest institutions of higher knowledge—The University of Arizona and Arizona State University.

The rivalry (which really hasn't been much of a contest over the years), has seen the Wildcats on the winning end in 15 of the last 20 matchups—including five straight since 2016.

The first clash between the two went the way of the Wildcats, with Sean Miller's squad narrowly escaping a home court defeat, 84-78, over the then-third ranked Sun Devils.

Arizona's victory in the Dec. 30 matchup stemmed largely from ASU's inability to hit the broadside of a barn offensively, shooting a dismal 37.9 percent from the field (and 32 percent from three-point territory) in the contest.

The Sun Devils' performance in that game looks even ghastlier when you remove do-it-all point guard Tra Holder from the equation. Holder, who has been one of the best scorers in the nation this season, pummeled the Wildcats' defense, to the tune of 31 points in the late December showdown.

Holder, who leads the Sun Devils offensively, with 19.3 points per game, has been red-hot in ASU's last five games, scoring 20 or more points in four of the five contests, with 22 points in each of the team's wins over USC and UCLA last week.

Miller admitting during his weekly press conference that the Wildcats' were lucky in their first contest, saying the game's final stats reflected ASU's inability to score, rather than his team playing excellent defense.

"That's a little deceiving because you have to realize how many three-point attempts
they're taking, right?" Miller said. "...So for us, you have to be careful. Free throw attempts, three attempts are big parts of ASU's attack and the consistent effort throughout, not just in the first half but both halves and being able to get great defense from our bench in a continued effort."

A big advantage for Arizona this go-around is the relative health of sophomore guard Rawle Alkins, who missed a large portion of the season with a foot injury.
Alkins, who was held to 7 points on 3-7 shooting in the Dec. 30 game at McKale, has lately showed flashes of glory, scoring 20 points in Arizona's 81-67 win over USC on Saturday—after dismal outings against Washington and UCLA, where he scored a combined 9 points on 4-20 shooting.

The Brooklyn, N.Y., native took the fall for his performance, but believes the best is yet to come, now that he's back in playing shape.

"I think people are thinking about my bad performance the last two weeks to the injury," Alkins said. "You know, I guess you guys aren't used to seeing bad nights from people, but it's like the world's over when you have a few bad games. But I'm happy to bounce back from that game, and I think that the best is yet to come."

Alkins believes his team will have to bring its best on Thursday night, in order to knock off a suddenly-scorching Sun Devils squad.

"I think it's going to be a great game, a great atmosphere," Alkins said. "It's a sold-out game, and a great environment, and we're just going to have to bring our A-game."

The sophomore compared the Grand Canyon State Showdown to other marquee rivalries, such as the North Carolina-Duke contests, saying the school's proximity and fan dedication is similar.

"Because it's it's two home towns playing against each other. And it's mostly for the fans, to be honest," Alkins said. "I think they just want their school to win. But for us, I think we just want to win because we need the win."

How to Watch: Arizona plays ASU on Thursday at 7 p.m. in Tempe on ESPN

Who to Watch: ASU has four players averaging more than 10 points per game, led by guard Tra Holder, who averages 19.3 PPG. Shannon Evans averages 17.2 PPG, while Kodi Justice and Romello White average 12.6 and 11.8 PPG for the Sun Devils.

Is Bill Walton Covering the Game?: No, sadly, the Most Interesting Man in Broadcasting will not be making an appearance court-side in Tempe. We will be robbed of Walton likely doing some crazy, hallucinatory things surrounding peyote and cactuses...