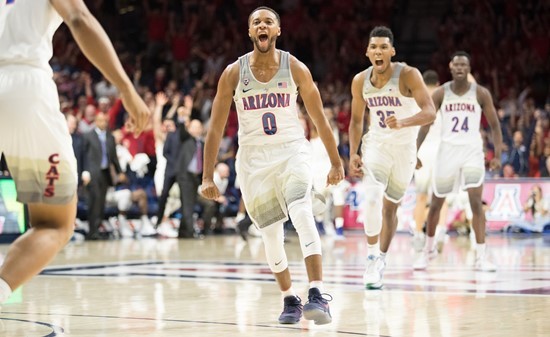 The course of the Pac-12 conference season swung on a blocked shot by Arizona freshman Deandre Ayton.

The block, which came in the waning seconds of Arizona’s road game against Washington on Saturday night, careened toward the far sideline, right into the hands of junior forward Dominic Green.

Green, who entered Saturday’s contest averaging a paltry 5.7 points per game, calmly set his feet, cocked his long arms and fired the ball toward the net. His shot was pure, arching past the outstretch arms of Arizona guard (and Seattle native) Allonzo Trier—giving the hometown Huskies a hard-fought, 78-75 upset of the ninth-ranked Wildcats.

The loss, the second of Arizona’s 11-game conference season, injected life into the teams chasing them in the Pac-12—none more so than the hard-charging UCLA Bruins.

Those very same Bruins survived a last-second shot of their own on Saturday, beating crosstown rival USC, 82-79, to move within two games of Arizona in the conference title race.

The Bruins and Wildcats, coincidentally enough, square off under the blinding spotlight of the McKale Center at 7 p.m. tonight—in what might be the game of the year in the Conference of Champions. The Bruins, who somehow lost three of seven conference games between Dec. 29 and Jan. 20, suddenly find themselves with a swaggering level of confidence, ready to take down the conference’s alpha dog.

Take, for instance, UCLA’s oft-soft spoken big man Thomas Welsh, who hit a crucial three-pointer to give the Bruins a lead they’d never relinquish against the Trojans.

Welsh, who scored 21 points against USC, expressed a level of confidence and swagger that speaks volumes about the program’s suddenly surefooted standing in the conference race.

“Both teams are going to come out fighting and make you punch first and keep on punching,” Welsh said.

The Wildcats, and ninth-year coach Sean Miller, have never been one to shy from a challenge, with senior point guard Parker Jackson summing up the team’s mindset ahead of the homestand.

“It’s going to be a big week, obviously two great teams battling for, you know, top spot in the conference,” Jackson Cartwright said. “And it’s just going to be a battle. Every game’s a battle, so we just have to be ready to go. Put that game behind us, and move forward, and focus on UCLA.”

A sweep of the Bruins and Trojans would go a long way toward giving Arizona at least a share of the conference crown—with games against Oregon State, Oregon and ASU on the road, before finishing with Stanford and Cal at home.

Miller isn’t convinced that his team can do enough on the defensive end to separate themselves from the competition.

It’s hard to argue with him, with KenPom.com ranking the Wildcats 106th in the nation in defensive efficiency—well below the Bruins, who rank 27th in the same metric.

Miller is far from pleased by the defensive mettle, or lack thereof, by his players—but finds silver lining in the six-week interim between now and the start of next month’s NCAA Tournament.

“I think our mantra moving forward isn’t to win the PAC-12, it’s not to beat the next team,” Miller said. “It really has to be to look at ourselves and have a sense of improvement to know that we have to get better at certain areas of the game for us to have the most successful season that we can.”