The Sanctuary Movement has grown from 400 to 1,100 congregations nationwide since Donald Trump’s election.

Sanctuary congregations aid immigrants and the immigrant community in a variety of ways, including hosting legal clinics, advocating against and taking actions to stop deportations and housing immigrants in danger of deportation.

“ICE is attacking us as leaders and activists at the local and national level,” said Ingrid Encalada Latorre, an immigrant and activist currently in Sanctuary in Colorado. “They don’t want us to lead, but they won’t silence us because we too have rights as immigrants in this country.”

In the months after Donald Trump’s election, the number of congregations offering sanctuary to immigrants under threat of deportation doubled from 400 to 800 nationwide. The movement continues to grow, across 25 states. And the number of Sanctuary coalitions have grown from 12 to 40 since 2016, according to a new report, “Sanctuary in the Age of Trump,” released by a coalition of faith leaders, including Rev. Alison Harrington, a pastor in Tucson’s Southside Presbyterian Church. 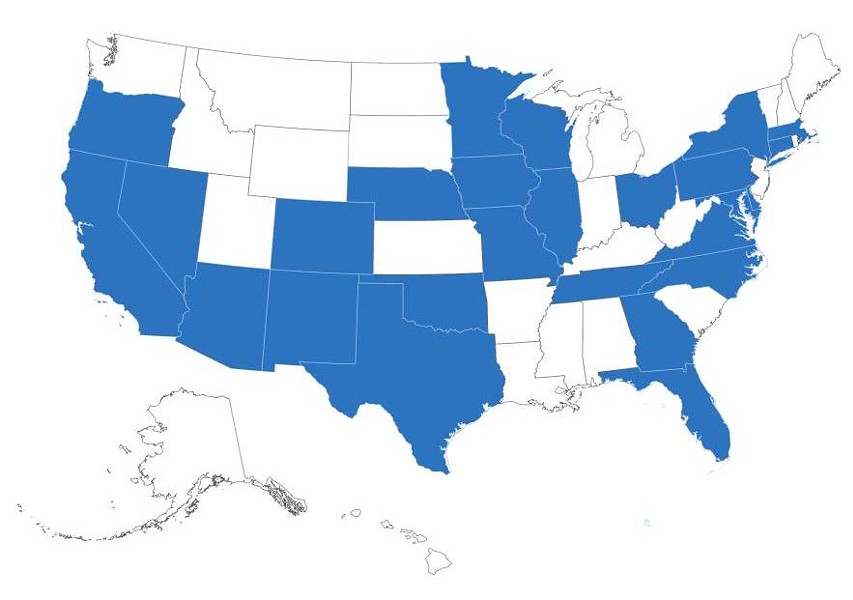 North Carolina currently has more people in sanctuary than any other state, with five. And their movement continues to grow, with six more congregations working on becoming sanctuary churches and more calling each day, said Rev. Julie Peeples, senior pastor at Congregational United Church of Christ, in Greensboro, North Carolina.

“It is really growing rapidly here,” Peeples said. “My congregation and I continue to be inspired by the courage and strength of those in sanctuary and their leadership. They are teaching us how to love our neighbor and how to honor our nation’s pledge of ‘liberty and justice for all.’”

The report also says that it’s no longer just cities with large immigrant population that have congregations in the Sanctuary Movement, but more rural areas with a recent influx of immigrants, in states like North Carolina, Ohio, Oklahoma and Virginia.

Congregations gave sanctuary to 37 people facing deportation, in 2017. Nine received some sort of temporary reprieve from deportation. Today, there are 36 people in public sanctuary, nationwide, according to the report. 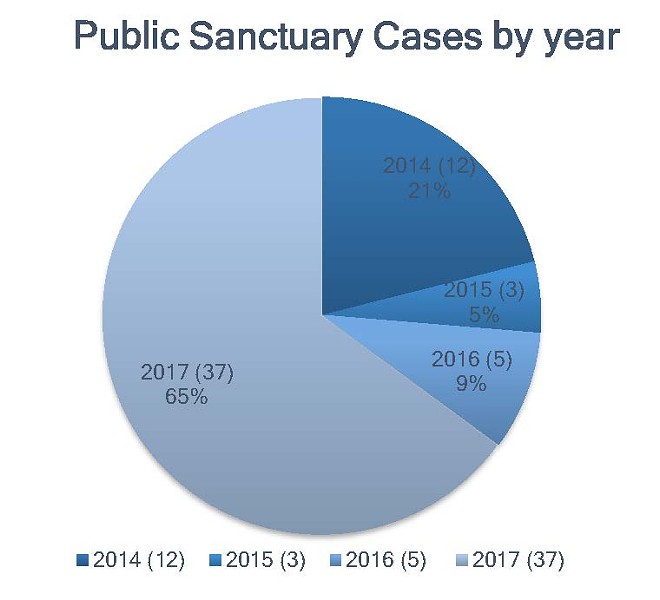 The Sanctuary Movement has grown in direct response to the ramping up of deporting immigrants whose only crime is being in the country illegally, many of whom were registered with Homeland Security and allowed a stay of deportation under the Obama administration, given they participated in routine check-ins with ICE.

Today, ICE searches these people out, although they are well known to the government and have complied with their regular check-ins. The new report details the arrests of several immigrants with deportation stays who are immigrant rights activists, including immigrate-rights activist Ravi Ragbir, who was detained during a routine check-in meeting with ICE officials in Manhattan, on Jan. 11.

Ragbir was one of a number of immigrants vocal in the movement arrested by ICE in January. His arrest sparked protest that ended with 18 arrests, including two members of the New York City Council.

“I am appalled to see the growing attacks on immigrant leaders,” said Ragbir’s wife Amy Gottlieb. “Ravi was detained at a regularly scheduled check-in with ICE, even though nothing had changed in his legal case. It is clear that he is targeted because of his outspoken challenges to our unjust immigration system. It is devastating to see my husband and so many others locked up in county jails, their liberty taken away from them, while private companies and others profit from our suffering.”

The faith leaders who contributed to the report said they plan on expanding the movement in the Southwest and Midwest and hosting trainings and strategy meetings.

“Sanctuary is needed more than ever,” the report says. “People of faith from many traditions recognize the increased need for Sanctuary as the harsh anti-immigrant, anti-refugee, anti-black and anti-Muslim policies come to life under the Trump Administration.”

“Sanctuary in the Age of Trump” also details stories of several immigrants who and sought sanctuary, more examples of ICE ramping up intimidation tactics, and 10 policy recommendations.