I feel something akin to culture shock when I walk into Tucson Fashion Week on Friday night. The showroom and patio at the Museum of Contemporary Art are full of bodacious babes with mega hair and clothes that are too cool—even for Buffalo Exchange.

The three-day event, which began Thursday, Oct. 13, featured different venues, designers, music performances, food and drink each night.  Maybe it’s from living too long in this laid-back desert town, but I’m out of place. The only thing I have that I can relate this scene to is Sex and the City. (Yes, I’m a child of the ‘90s.) So I just imagine I’m Carrie and dive in. Although the lights, the music, the heels and the clothes that seem to defy gravity are unlike an average Friday night downtown, the fashion week’s roots are all Tucson.

“Hopefully we can spread the love a little bit and bring a little awareness around fashion to our community,” says TFW co-director Paula Taylor, who’s worked in fashion for 20 years. “We have this incredible community with so much talent here, and nobody gets to showcase it.”

Taylor and her cohort Melanie Sutton curated the show with local and national talent.
“We’re actually a really international city, and I think we’re starving for content,” Taylor says. “If we provide the platform people will actually come.”

Four years ago, TFW founder Elizabeth Denneau was running the show as a small artsy production. Taylor and Sutton bought it and turned it into the national production it is today.

One of Friday’s presentations features the designs of Tucson-born Quinlan Wilhite. Founder of the fashion company Qmulative, Wilhite began sewing only three years ago when he had an idea for a shirt and asked his grandmother to show him how to sew.


She taught him the basics, and he’s currently taking sewing classes at Pima. He sells his clothes at the FoodInRoot, St. Phillips Plaza and the UA Main Campus farmers’ markets. He also sells his clothes online and is designing shirts for the sustainable clothing store Fed by Threads. Not bad for three years of work.

“I never doubted myself, but I didn’t see this when I first learned a pocket shirt, a couple years ago,” he says, motioning to the photographers and entourage of male and female models wearing his designs.

And the Tucson fashion world is just getting better, Wilhite says.  “It’s a cool scene,” he says. “I’m meeting all kinds of people and just trying to think bigger.”

Friday also featured the work of designer Dorota Zglobicka and her company Theo Doro Fairyland Zglobicka moved to Tucson from Poland a year ago. Her wild red hair and handmade baby-blue dress fit with her featured clothing line, Mad Dollhouse. With a background in fine arts, she broke into fashion design at a 2013 fashion show in Poland.

“The collection is inspired by what I’m seeing behind my window,” she says about Mad Dollhouse. And what she sees from her window is prickly pears. She loves the desert landscape and was influenced by its beauty.

Every night of the show is totally different, says Taylor. Thursday’s show, held at Hotel Congress and Rialto Theatre, had fashion that wasn’t girly. It was a little tougher—rock-and-roll T-shirts and Harley Davidson.

And while Friday’s show has hundreds in attendance, Saturday’s is more exclusive, with only 185 people attending.

“It’s like going to Paris Fashion Week,” Taylor says about Saturday. “You sit down, and you have what is called a tour show.”

Models will be slowly walking the catwalk, done up in very dramatic hair and makeup.
The proceeds from Saturday’s show, in partnership with the Tucson Ladies Council, will all go to the Southern Arizona Children’s Advocacy Center, which provides services to child abuse victims.
TFW is a reflection of our community on a professional level, Taylor says.

“We make a community event that is fashion focused,” she says. “People come in, and they’re experiencing rock-and-roll music or classical music. They’re experiencing great food, interesting drinks, cool architecture. And we bring industry leaders like architects and stylists and designers and rock-and-roll musicians and artists all together—that to me, really speaks to Tucson.” 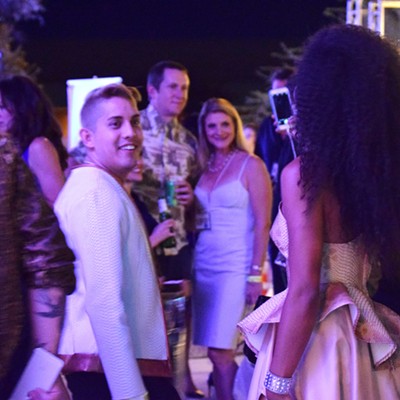