Saturday's event at Oak Flat Campground featured Apache rhymers and their colleagues from Dine (Navajo), Ogala Lakota, Sicangu Lakota and Yaqui cultures, presenting both native traditions and the more contemporary rhyming and new soul of 21st Century pop and hip hop, all with messages driven home by beats as insistent as those of the traditional drums that accompanied the Apache Crown Dance and the Yaqui Deer Dance.

Members of the Tohono O'odham and Hopi nations supported the cause with their attendance, and the whole day was about the importance of community, spreading awareness and making common cause.  After all, the Apache may be the most aggrieved by Arizona's Senators McLain and Flake' hat trick to allow Rio Tinto to build a mining operation that in 20 years will leave a miles-wide crater. But that's public land so it's actually being taken from all U.S. taxpayers too.

In an effort to stop the mine, Native American youth have occupied the camp, some since February. Elders have supported them with food and other essentials, and delegations of press and other activists have been welcomed.

The youth and elders prepared a free meal for the two hundred or more men, women and children who had made the trip to the campground for a day of entertainment, education and community. Artists painted murals on the spot, and  poetry readings and  traditional ceremonial dancing rounded out the main event, which took place in a large adjacent field. The surrounding scrub oak woods  provided shade for families among the datura and sumac. Some families collected the bushes' bright red berries to make a traditional beverage. 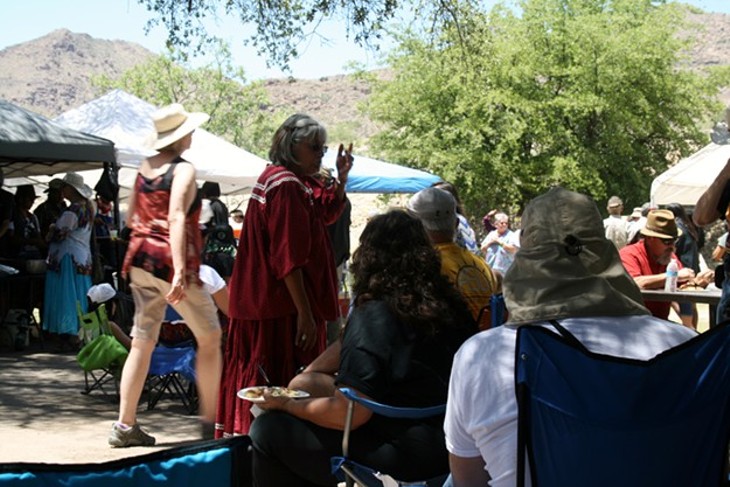 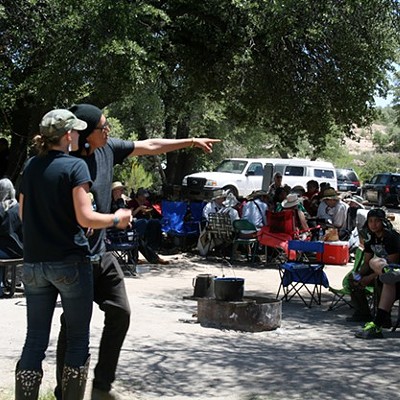 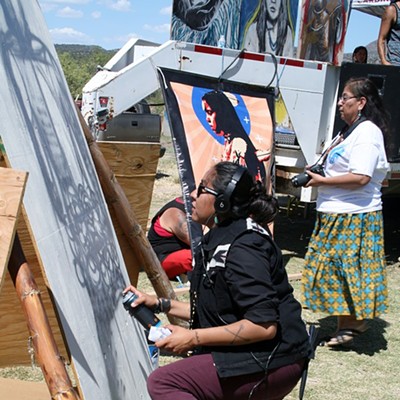 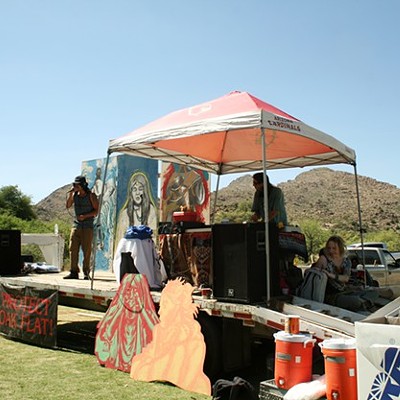 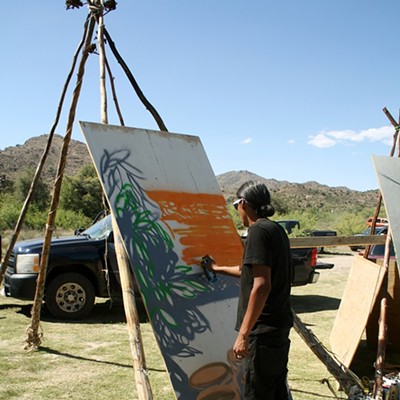 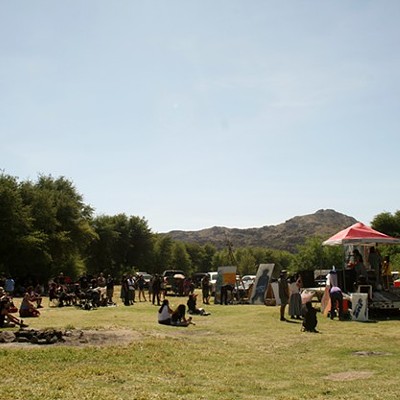 Apache Youth Activism at Oak Flat
By Linda Ray
Click to View 11 slides
Emcees graciously welcomed the most senior audience members, including one of the emcee's grandmothers and the mother of the current tribal chairman. Organizer Naelyn Pike introduced her grandfather, Wendsler Nosie, Sr, to give a welcoming message full of hope for future cooperation, thanks that Oak Camp is achieving greater notoriety, and a difficult summary of the tragedy and hope of Apache history in the San Carlos area.

Thanks were heaped on the cooks, and San Carlos rapper Standing Fox rhymed a song that could have been in their honor, stringing together the names of popular traditional dishes, like squash soup. with some of the most interesting beats and samples of the day.

A San Carlos native, he stood out in a field that was much better than it had to be for an outdoor venue and an audience more distracted than most. Many songs performed by Indigenize, Chin Chin and actress Happy Frijo emphasized the strengths of the native community and, especially, the gifts, both practical and spiritual, provided by "The Creator."

But Nataani Means, who identifies as Olgala Lakota, Omaha and Dine (Navajo), broke open any barrier on emotions and rapped fierce rhymes about what it's like to live in an oppressed and depressed culture in a small town with drunks on the street and no chance of an internet or cell phone signal, let alone a future.

Meanwhile artists Jake Toledo and Carrie Curley painted panels for a mural to stand in the camp. Curley's was an impressionistic black and white crown dancer with splashes of red to indicate that he represented the Peridot district, the one in which Oak Flat resides.