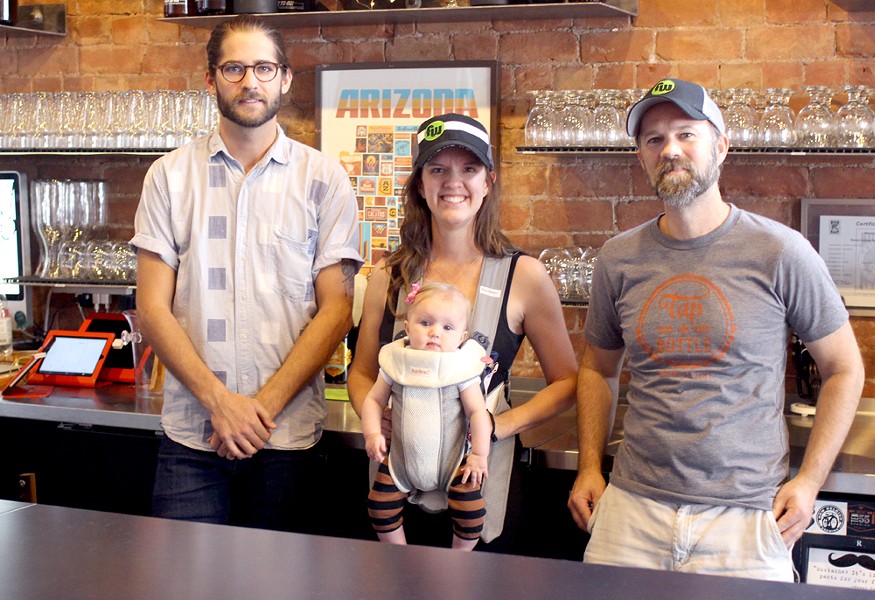 On the precipice of Tap & Bottle's two-year anniversary, Rebecca and Scott Safford have decided to make some changes. While the wife-and-husband duo has been running operations largely on their own at their beer and wine bar and bottle shop off of Sixth Avenue since it opened in June 2013, they have now decided to enlist some help by hiring Connor Mansager as their bar manager.

"He's our first manager so this is a big step for us," owner Rebecca Safford says. "I think it's going to bring us to the next level."

She says that one of the main reasons Mansager was brought on board is that the bar is planning to open a second location, though that is still in its very early stages and no details on where it will be are currently available.

Tucson barflies likely know Mansager's name already as a Scott & Co. and later Agustin Kitchen bartender. Although he's primarily known for his gifts in the cocktail and spirit world, Mansager says hospitality is his main specialty.

"I'm all about the hospitality business," he says. "I like to see people come into the space where I work and have a good time whether it's a beer bar or a dive bar or wherever else."

"What makes Tap and Bottle special is what Connor already does well—it's talking to customers," Safford adds. "We really are a neighborhood bar."

Safford says that while Mansager's new position will mostly be a "continuation of what we've been doing," she hasn't ruled out incorporating his expertise in the cocktail world over at Tap & Bottle in the way of an increased and more consistent beer and wine cocktail offering.

"We were excited to bring Connor on because he has a true appreciation for drink and what it means to be craft," she says.

Mansager says his overall experience will contribute to the environment regardless.

"My past experience in fine dining and fancy cocktails won't be lost here," he says. "My end goal has always been the person sitting in front of me."

You can catch Mansager at Tap & Bottle, located at 403 N. Sixth Avenue #135, this weekend at the shop's second annual Sour Beer Fest, which will feature 15 taps of different sour brews as well as special bottle tastings. We'll keep you updated on news of that second Tap & Bottle location as it becomes available.