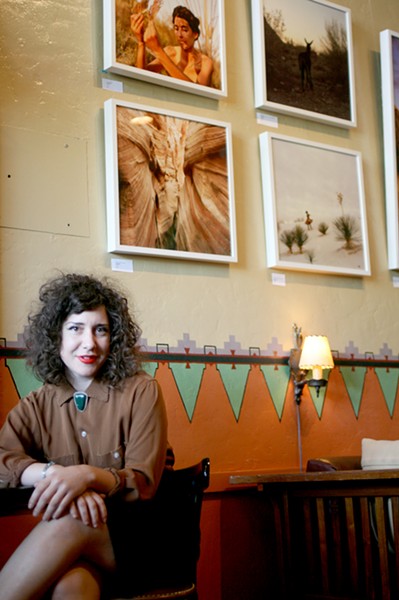 Recently, local artist Nika Kaiser has been more known for her video work, directing music videos for local favorites like Prom Body and Gabriel Sullivan. Her current photo exhibit, "Desert Varnish," in the Hotel Congress bar and lobby area is like her video work in that it looks at spiritualism and metaphysics in the context of the region with, what she refers to as, "characters in a fragmented story."

Ten striking images—two large and eight smaller—seem to tell a part of a story, maybe not the beginning or end, but a definite glimpse into a world that seems almost familiar. Kaiser says this was part of her intention for the show.

"I want to have the viewers process beyond that moment that’s presented to them," Kaiser says.

Beyond that, her work bears strong ties to the desert—"the American west." Seven of the ten photos were taken within a hundred or so miles of Tucson, with just three shot in Utah, Oregon and New Mexico. In that setting, she melds broad landscape shots with portrait-like photos of flora and fauna, as well as those characters that she invents. She says she seeks to blur the line between human and nature in this exhibit.

"I wanted all of the images to be both portraits and landscape at the same time without a division between man—or woman—and nature," she says.

To that point, Kaiser says she's particularly inspired by representations of the female form and its relation to nature. One photo uses the shape of surrounding yucca to play inversely with the shape of a twirling girl's skirt. In that way, Kaiser says the character is playing in nature, not being in opposition to it, and allowing herself to be vulnerable to nature in a positive way.

Though, in terms of palette, Kaiser's photos use a lot of bright, vibrant colors, there is a feeling of darkness to them. She says that darkness comes from her metaphysical and surreal inspirations.

"It’s that quality of the unknown that is disconcerting," she says. "When things are just outside of reality there’s uneasiness."

The pieces in the show exist in a space where "science and the metaphysical align," according to Kaiser. Even the name "Desert Varnish" alludes to a "dark iridescent coating on rocks in arid regions."

"It's considered both an animal and a geological composite," she says. "It kind of exists in this place that transcends logic and becomes spiritual."

Kaiser clearly draws from the aesthetic and history of the southwest, but she is also inspired by experimental filmmakers Alejandro Jodorowsky and Maya Deren as well as photographer Lola Alvarez Bravo. Kaiser replicated one of Bravo's pieces in the show.

With the space—Hotel Congress—in mind, she crafted photos expressly for the hotel, though she didn't realize until she was hanging her works for the show that she would love how much they interacted with the mural work on the lobby walls.

"I wanted to show the magic—I know that word is overused—but the magic of the landscape here along with the richness of history here," Kaiser says.

You can view Nika Kaiser's "Desert Varnish" at Hotel Congress now through May 27. The show is free to view.