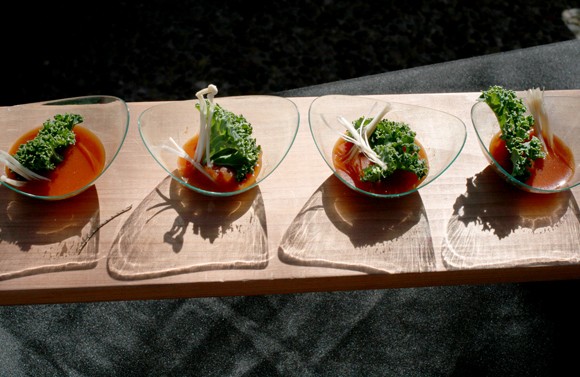 Food enthusiasts flooded into the winding pathways of the Tucson Botanical Gardens on Saturday, Feb. 7 to get a taste of some of Tucson's top dining destinations. Diversity was the name of the game for the event this year with dishes ranging from Hawaiian to Vietnamese to Cajun to Japanese to Italian. Comfort food bites were done up with upscale ingredients—even the cotton candy was made with organic cane sugar courtesy of Fluff It Up.

With all of the variety, one dish definitely popped up more than the rest: tacos. Nox's duck hoisin taco was an interesting fusion take on the dish and Boca's chorizo-piled breakfast taco was the kind of stick-to-the-ribs breakfast option you'd certainly want after a night of drinking. Savor's tastiest taco this year, though, was from Proper. Their Barrio Blonde beer-battered fish taco used incredibly tender white fish and a surprisingly herby batter as the simple, but impressive, taco base.

Over in the VIP section, it was clear the area well worth the extra splurge, as some of the day's best dishes came from the exclusive spot. Cafe Botanica, which typically resides in the botanical garden, offered up buttery, flaky empanadas, heirloom legume spreads and a range of olives grown on site. Another standout was the savory beet crostata from Pizzeria Bianco. Although it looked like a classic (and sweet) French galette, the tangy Crow's Dairy goat cheese on top made the distinction between dessert and appetizer clear.

The best dish of the day was from Bob's Steak & Chop House of the Omni Resort. Successfully serving medium rare lamb lollipops en masse is impressive on its own. However, the sweet, cream corn-studded polenta and perfectly spicy and sweet mango habanero bordelaise really took the dish to the next level.

It wasn't all about the food, though. Casino del Sol bartender Aaron DeFeo served up three light and bright cocktails perfect for midday drinking in the sun. Using grapefruit, a range of vegetables and rose syrup as the star of each of his drinks, DeFeo made sure there was a little something for everyone. However, beer and wine drinkers were certainly satisfied as well, with a number of local breweries and wineries serving up pours as well.

As a whole, Savor's 2015 event was definitely a great way to spend a Saturday and, as was expected, totally filling.