Previously, the couple ran a small fleet of Model Ts outfitted with large freezers to sell their handmade, all natural ice cream. Kristel Johnson says the idea came from the couple’s desire to make a “not creepy ice cream truck” that they could send their daughters to. 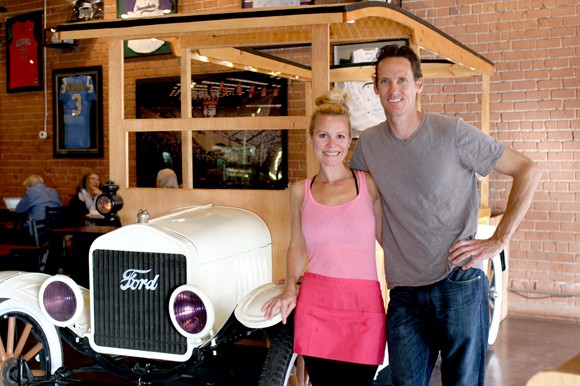 Two years after the initial concept was formed, the trucks were born and about a year and a half after that the couple was approached by Maynard’s Market to begin making flavors for the restaurant. At that time, the couple had to make all of their product on Cuisinart machines in their kitchen. After a Kickstarter campaign helped them raise $15,000, the couple moved their operation into a larger production facility, which is good because Whole Foods, Safeway, and several local restaurants and markets are stocking their ice creams.

Currently, the Rincon Market location has 15 flavors on hand, including cinnamon, prickly pear, lavender vanilla, and spicy chocolate with cayenne pepper. Kristel says in the past she’s made custom ice creams and sorbets including whiskey bacon and caramel, kale-apple-ginger, celery, and a pineapple and bell pepper. 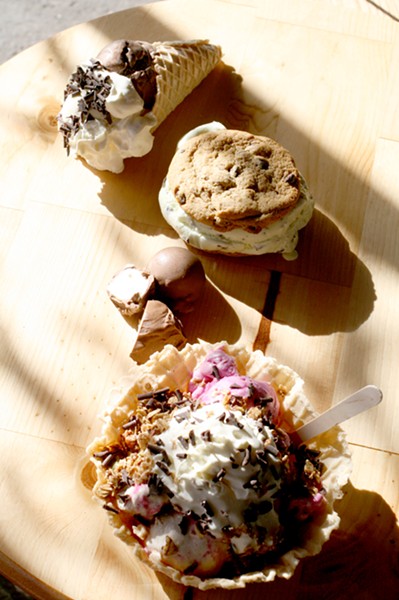 The ice cream parlor sells ice cream sandwiches ($5), hand-dipped bon bons ($2), pints to go ($7), sundaes ($6.50), and freshly made waffle cones with one scoop for $3.50 and $6 for a double scoop. The cones, sundaes, and sandwiches are all fully customizable—and the couple doesn’t skimp on toppings if you’re the type who likes to load it up.

Kristel says she makes the bon bons with Belgian chocolate and uses liquid nitrogen to freeze them into perfect circles. In terms of chemicals, that’s the only one you’ll really find in Isabella’s products. Kristel explains that even the cream she sources is completely pure and without stabilizers, which is rare to find.

In order to have complete control over her product, she makes the caramel and chocolate sauces (which are vegan), all of the ice cream (which is gluten free), the sorbets (which are vegan), and pretty much everything else associated with their new parlor. The base of all of the ice cream is simple—just cream, milk, eggs, and cane sugar. She notes that she never uses peanuts in her facility, as many are allergic to them.

Dominic, who was once an Olympic track and field athlete, was in charge of remodeling the vintage Model T, chairs, and tables in order to give their area inside of the market and olde tyme feel for those finishing touches.

Isabella's Ice Cream is open now at 2315 E. 6th Street inside Rincon Market weekdays from 11 a.m. until 9 p.m. and later on the weekends.