If you haven't gotten around to filing your taxes and decided to blow off working on your return this weekend to actually have fun, today's the day you need to actually get the slide rule out and compute your offering to our federal and state governments. The Cherrybell post office, as is tradition, will be postmarking envelopes until midnight tonight, in case you still actually use paper forms and stamps and such.

This probably isn't helpful or encouraging, but it turns out this day isn't quite so ominous for America's super wealthy, since it seems most of them are either paying less percentage-wise than most of us common folk, or even better, nothing at all:


Still scrambling to file your taxes? You'll probably take little consolation in hearing that the super rich pay a lot less taxes than they did a couple of decades ago. And nearly half of U.S. households pay no income taxes at all.

The Internal Revenue Service tracks the tax returns with the 400 highest adjusted gross incomes each year. The average income on those returns in 2007, the latest year for IRS data, was nearly $345 million. Their average federal income tax rate was 17 percent, down from 26 percent in 1992.

Over the same period, the average federal income tax rate for all taxpayers declined to 9.3 percent from 9.9 percent.

The top income tax rate is 35 percent, so how can people who make so much pay so little in taxes? The nation's tax laws are packed with breaks for people at every income level. There are breaks for having children, paying a mortgage, going to college, and even for paying other taxes. Plus, the top rate on capital gains is only 15 percent.

There are so many breaks that 45 percent of U.S. households will pay no federal income tax for 2010, according to estimates by the Tax Policy Center, a Washington think tank.

"It's the fact that we are using the tax code both to collect revenue, which is its primary purpose, and to deliver these spending benefits that we run into the situation where so many people are paying no taxes," said Roberton Williams, a senior fellow at the center, which generated the estimate of people who pay no income taxes.

The Rialto's Curtis McCrary Takes on the Sound Strike in Salon

I Should Probably Reconsider My Choice of Careers

Claytoon of the Day: Mythical Audits 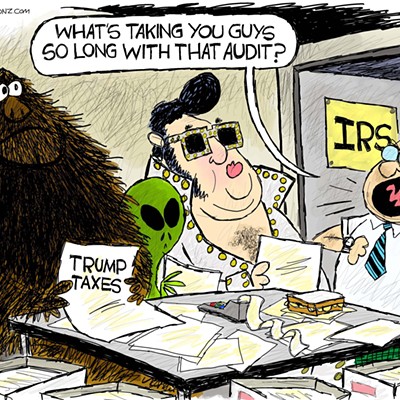